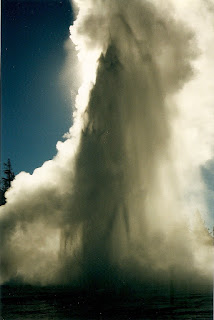 I'm the only person I know of who has watched a geyser and thought, wow, wouldn't that make a terrific time travel device.  I'm not sure what that says about me, except perhaps that I grew up reading spooky stories while riding in the back seat of a car all over the North American West.

My father's idea of the perfect summer vacation, was, in my mother's words, to drive as far as he possibly could until he had to turn around to get back to work on time.  But my father's goal wasn't to rack up mileage.  He wanted to see as much of the West's marvelous natural heritage as possible.  By the time I graduated high school, we had, among other things, visited almost every national park west of the Mississippi, ridden the mules down to the bottom of the Grand Canyon, and driven the Alaska Highway, back when it was 1,200 miles of gravel and 300 miles of frost heaves. 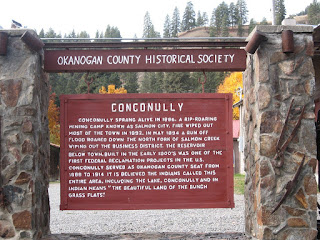 How could anyone fail to fall in love with everything about the West, given such a fortunate childhood?  How could anyone not want to keep traveling and learning?  I've "collected" both natural and human history from everywhere I've been, purely for the joy of it.

Then there's that other thing.  I gravitated towards stories of the supernatural from a very young age.  One of my earliest favorites was a book called Fog Magic, about a young girl who wanders over a hill to discover a living, thriving village where there had only been cellar holes before, a village that only exists when it's foggy out.

Later came Barbara Michaels, whose books like Ammie Come Home and my favorite House of Many Shadows, are about ordinary people dealing with the supernatural, time slippage and ghosts and history re-enacting before their very eyes.  And Mary Stewart's Touch Not the Cat, about a family with a peculiar secret.  And dozens of other books like them.

It all seems so possible, even though I know it isn't.

I'm not a big fan of supernatural beings, as such.  I'm more interested in the phenomenon side of things, about fitting the supernatural into real history, populated mostly by people who really lived.  And in how otherwise ordinary people deal with things they can't believe exist. 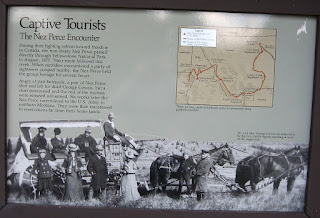 For instance, that geyser.  The hero of Repeating History, the first of my “Time in Yellowstone” novels, simply happens to be in the wrong place at the wrong time, standing in front of Grand Geyser when the 1959 Hebgen Lake earthquake hits.  The next thing he knows, he's lost in the wilderness, and it's only when he runs into some rather odd tourists, and, along with them, is kidnapped by the Nez Perce, that he discovers he's now in 1877. 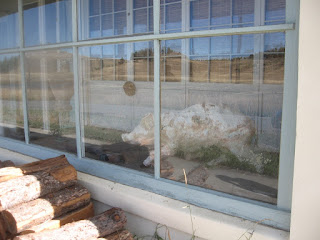 Then there was this plaster pig and a flood.  The real pig lives in an abandoned storefront in Washington's Okanogan country, and the flood actually happened.  But the pig in Sojourn, my first “Tale of the Unearthly Northwest”, is something else altogether, as is Dan the highway patrolman, who didn't go chasing after anyone but a drunk driver, but ended up with way more than he bargained for.

M.M. Justus lives on the rainy side of Washington state.  She spent most of her childhood summers in the back seat of a car, traveling with her parents to almost every national park west of the Mississippi and a great many places in between. She holds degrees in literature, history, and library science, and a certificate in museum studies. Her other interests include quilting, gardening, meteorology, the travel bug she inherited from her father, and keeping the cat out of trouble.  That last is mostly a lost cause.

Posted by Heidiwriter at 6:00 AM

I loved Fog Magic too! Thanks for this blog - it was a pleasure to read! I share similar interests and I look forward to reading some of your writing!

Someone else who knows Fog Magic exists! I'm glad you enjoyed my post.

I had a copy of Fog Magic from the Scholastic Book Club. Probably still in my parents' basement!

I ran across a copy of Fog Magic a few years ago, bought it, and reread it. It holds up pretty darned well, actually.