Defying family and social pressure, Nettie Brady bucks 1920s convention with her dream of becoming a rodeo star. That means competing with men, and cowgirls who ride the rodeo circuit are considered “loose women.” Addicted to the thrill of pitting her strength and wits against a half-ton steer in a rodeo, Nettie exchanges skirts for pants, rides with her brothers on their Montana ranch, and competes in neighborhood rodeos.

Broken bones, killer influenza, flash floods, and family hardship team up to keep Nettie from her dreams. Then she meets a young neighbor cowboy who rides broncs and raises rodeo stock. Will this be Nettie’s ticket to freedom and happiness? Will her rodeo dreams come true?

Based on the life of the author’s grandmother, a real Montana cowgirl.

While scouting locations for a film documentary on Arizona’s Apache Wars, private investigator Lena Jones and Oscar-winning director Warren Quinn discover the mutilated body of a young girl.
The gruesome manner of the child’s death evokes memories of Lena’s own rough childhood. Despite clashing with the local law, Lena investigate’s the child’s death and discovers a small town with a big secret.
Los Perdidos is not the Eden it first appears. Founded by the descendants of pioneers who fought Geronimo, it now holds a significant population of documented and undocumented foreign-born residents who live and work at the local chemical plant. Lena senses a sinister force at work in the town -- but where?
The still vivid memory of Geronimo’s war mixes with the modern immigration war, and the hard life on the Arizona/Mexico border contrasts with Hollywood’s slick production meetings, and the cruelty of an ancient practice is tempered by a growing underground railroad fighting to save its young victims.

The Anteater of Death
By Betty Webb

In The Anteater of Death, an innocent anteater gets framed for murder.

But if Lucy, the pregnant giant anteater from Belize didn't kill the man found dead in her enclosure, who did? California zookeeper Teddy Bentley must find the real murderer before her furry friend is shipped off in disgrace to another zoo.

Then another human bites the dust, the monkeys riot, and the Mexican gray wolves go nuts. Things get even worse when the snooty folks at Gunn Landing Harbor attempt to evict Teddy from the Merilee, her beloved houseboat. And that's just the beginning of Teddy's woes. Her father, on the lam for embezzling millions, gets targeted by a local gangster; Caro, Teddy's socialite mother, a former beauty queen who loathes Teddy's dangerous job, starts introducing her to "eligible bachelors." But Teddy has already given her heart to Sheriff Joe Rejas, a migrant worker's son. Caro is not pleased.

Harvest of Books in Palmer Lake 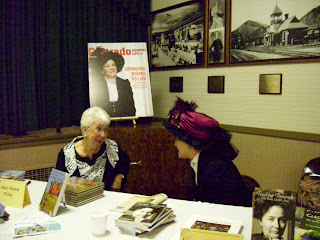 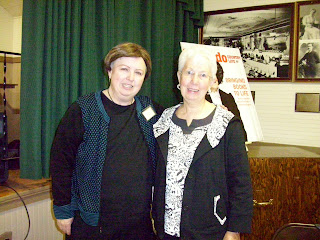 Recently in Palmer Lake they had the Harvest of Books and a number of WWW members were there. I attended with my trusty little camera and took some pictures. The event showcased authors whose books are published by Filter Press. Although I was unable to stay for the full event, I had the wonderful experience of connecting with members I knew and those I had only corresponded with on the web. Not only were the authors were able to talk about their books they also gave presentations from the stage.
Posted by Renaissance Women at 10:29 PM No comments: