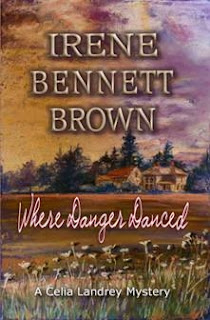 Celia Landrey is guiding her last walking-tour of the season in historic Pass Creek. Myriad tasks await her attention, such as planning her wedding to handsome cowboy real estate agent, Jake Flagg. Discovery of Smoke Allenby’s bones wasn’t on the agenda. But there they are, turned up in the removal project of an old underground fuel tank at Jolly Hoffman’s service station. A situation Celia, town leader, can hardly ignore.

Before he abruptly disappeared 60 years previously, half the town was in love with the charismatic drifter named Smoke Allenby. Older folks in the community knew the charming lothario back then, but when it comes out that Allenby was murdered, they’re not talking. What secrets do they hide? Are they protecting one of their own?

There are threats against Celia for her investigation but she’s determined to separate the innocent from the guilty­halt an eruption of serious trouble. She just wishes she knew whose skin she’s trying to save.

PRAISE for Where Gable Slept, first book in the Celia Landrey Mystery Series:


“Where Gable Slept is an exciting thriller and mystery, sure to entertain many a reader.”
--Midwest Book Review

Where Danger Danced can be purchased on: 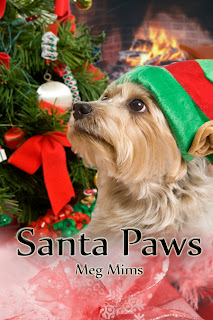 The last thing Lacey Gordon — divorced with a teen daughter and two cats — needs is a rescue dog coming into her life. To top it off, she’s rooked into a “Get Under the Mistletoe by Christmas Eve” dating contest. Since Buddy the dog prefers to be the only “new guy” in Lacey’s life, will Santa Claws ruin her holiday for good?
Available for purchase on:
Amazon Kindle, B&N Nook, Kobo and Smashwords.
Visit Meg at www.megmims.com 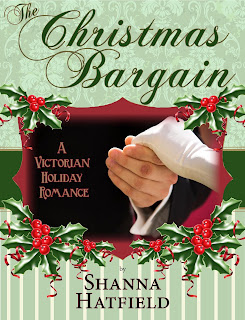 The Christmas Bargain
By Shanna Hatfield

Luke Granger is about to get more than he bargained for…

As owner and manager of the Hardman bank, Luke Granger is a man of responsibility and integrity in the small 1890s Eastern Oregon town. Calling in a long overdue loan, Luke finds himself reluctantly accepting a bargain in lieu of payment from the shiftless farmer who barters his daughter to settle his debt.

Philamena Booth is both mortified and relieved when her father sends her off with the banker as payment of his debt. Held captive on the farm by her father since the death of her mother more than a decade earlier, Philamena is grateful to leave. If only it had been someone other than the handsome and charismatic Luke Granger riding in to rescue her. Ready to uphold her end of the bargain as Luke’s cook and housekeeper, Philamena is prepared for the hard work ahead. What she isn’t prepared for is being forced to marry Luke as part of this crazy Christmas bargain.

The Christmas Bargain can be purchased on:
Amazon
Barnes & Noble
Smashwords 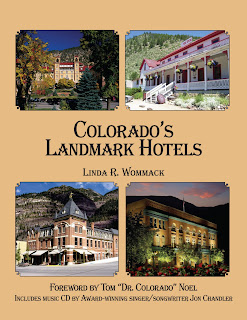 
Linda R. Wommack takes readers on a tour of the thirty historic hotels in Colorado that have achieved prestigious preservation listing from one or more of the following: the National Register of Historic Places, the National Trust for Historic Preservation, 'Landmark' designation by Colorado Preservation, Inc., or as city or county historic properties.The book includes a CD with songs by award-winning singer/songwriter Jon Chandler.
Published by Filter Press
http://www.filterpressbooks.com/

Colorado's Landmark Hotels book and CD are available for $16.95 at: http://www.filterpressbooks.com/coming_soon.html


Posted by juliepollitt at 4:50 PM No comments: