Getting the word out about your work 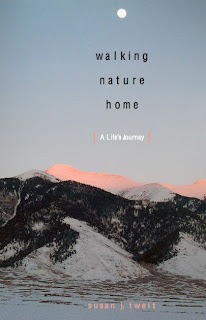 For those who are looking for ways to get the word out about your work, here's an example of the fairly simple tool I use. Every so often--about four times a year--I send out a one-page newsletter by email. The format's not terribly complicated, but it's inviting, it includes graphics to catch reader's eye, and it's short. Most important, it's something I can do myself in an hour or two and I get tons of positive responses. (I write this in a word-processing program, using a couple of my favorite fonts and a simple design which I can't reproduce here, and send it as a PDF via email by just "printing" it to PDF. Check the print command of your word-processor for this option.)

News from Sus[an] * Jan. '09 Eleventh in an irregular series

It's a New Year and I've got some good news! No, I haven't fixed either the economy or global climate change, but I am excited about what's happening in the country today. As for me personally, here's what's up:

WALKING NATURE HOME, my memoir, is coming out in March. It's a tale of what silence and sagebrush, bird bones and sheep dogs, comets, death, gardens, and one crazy Englishman have to teach us about love and life. Here's what others have said about it:
Walking Nature Home offers the reader a constellation of healing stories. Replete with Tweit’s powerful articulations of the human heart and overlaid with the stories of the natural world in all its wonder, this book joins the ranks of the great testimonies of our time. —Denise Chávez, A Taco Testimony: Meditations on Family, Food, and Culture
Susan Tweit has written a glorious love story—to her Rocky Mountain sage meadows, to her husband Richard, and finally, painfully, to her own unreliable body. I read this book long into the night, lifted by the beauty of the story, braced by its hard-muscled prose, strengthened by its wisdom. —Kathleen Dean Moore, The Pine Island Paradox

AND I NEED YOUR HELP: University of Texas Press produced a gorgeous book, complete with illustrations by artist Sherrie York, but doesn't have resources to finance a tour for Walking Nature Home. So I'm asking for your suggestions, recommendations, and leads for promotion. (Opportunities to earn something to defray travel expenses are especially welcome.) Do you know of a lecture series that needs me as a speaker? A radio show that could use an interesting guest? A class I could visit? A book group that would love this memoir? An event in search of a charming and inspirational speaker? A bookstore that should carry this book? A blog I should visit on my blog book tour? 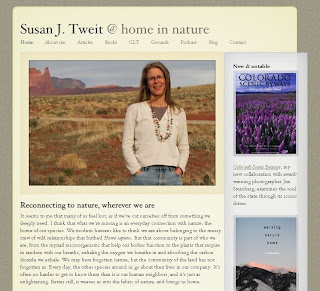 BEGIN AS YOU INTEND TO CONTINUE: My New Year's resolution is "write with my heart outstretched as if it were my hand." (I'm paraphrasing a line in a Mary Chapin Carpenter song.) So I'm focusing on inspiring others to live what I call a good life—green, simple, generous, intellectually and spiritually rich. Please visit my new web site (susanjtweit.com) and listen in to my new weekly commentary, "Green & Generous," and join the conversation on my blog, Community of the Land. (I'm working on a new blog that's more closely tied to the rest of my public "face" but I've run into technical difficulties. Stay tuned!) Blessings to you all, Susan J. Tweit

I make sure to use links, so readers can just click on the linked phrase to go to my blog, my publisher's site, etc. I include graphics to make it more appealing. And I always keep it to one page because I want it to be short enough to be read.

Let me know what you think! Susan J. Tweit
susanjtweit.com
Posted by Susan J Tweit at 11:51 AM No comments: 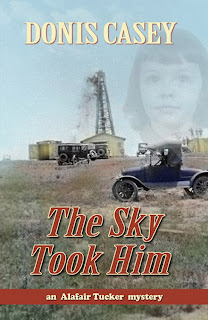 The Sky Took Him
An Alafair Tucker Mystery
By Donis Casey

It’s a sad duty that brings Alafair Tucker to Enid, Oklahoma, in the fall of 1915. Her sister Ruth Ann’s husband, Lester, is not long for this world, and the family is gathering to send him to his reward. Alafair had planned to make the trip on her own with her youngest daughter Grace. So she is surprised and gratified when her eldest daughter Martha volunteers to come along and care for Grace, freeing Alafair to comfort the soon-to-be-bereaved.

But her niece’s irresponsible husband, Kenneth, has disappeared at a most inconvenient time. When it comes to light that Kenneth has been involved in some shady dealing with Buck Collins—the most ruthless businessman in town—everyone is convinced that Collins has done him in. In fact, no other possibility is considered, not by the family or by the local lawmen. But Alafair suspects that things are not so simple.

Over the next few days, Alafair and Martha come face-to-face with blackmail, intimidation, murder, and family secrets that stretch back over twenty years. And in the process, they discover things about each other that will change their relationship forever.
The Sky Took Him, the fourth installment in the "Alalfair Tucker Mystery" series, is available for purchase from Poisoned Pen Press, on Amazon, from B&N, or it can be ordered by any bookstore.

An excerpt from the first chapter of the book can be found on Casey's website at http://doniscasey.com. Once you get to the site, just click on “About This Book” for the excerpt, or on “Reviews” to read the STARRED REVIEW Sky received in the December 8, 2008, edition of Publishers Weekly.

Published by Poisoned Pen Press
Posted by juliepollitt at 6:43 PM No comments: 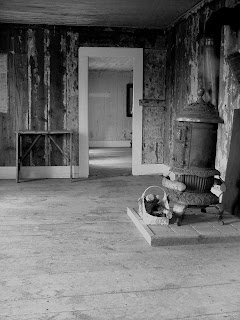 They say that a picture is worth a thousand words. Perhaps a picture can create a thousand words. The picture on the right is of the Hornbeck Homestead near Cripple Creek, Colorado. The history of this homestead is great reading. The written word tells the story, but the picture reinforces what the writer is writing.
What we as writers do can be complimented by what the photographer does. The photo was taken by my friend Nadine Keaney and I have it setting on my computer to remind me of what it might have been like back in the 'good old days'. It is an inspiration to me and a reminder that what came before. It informs what I do and what I hope to share with the reader. That history is something to be shared and learned from. To honor it and still see it with the rose colored glasses off.
To me that is preserving history. That is why I joined Women Writing the West.
Posted by Renaissance Women at 7:38 PM No comments: