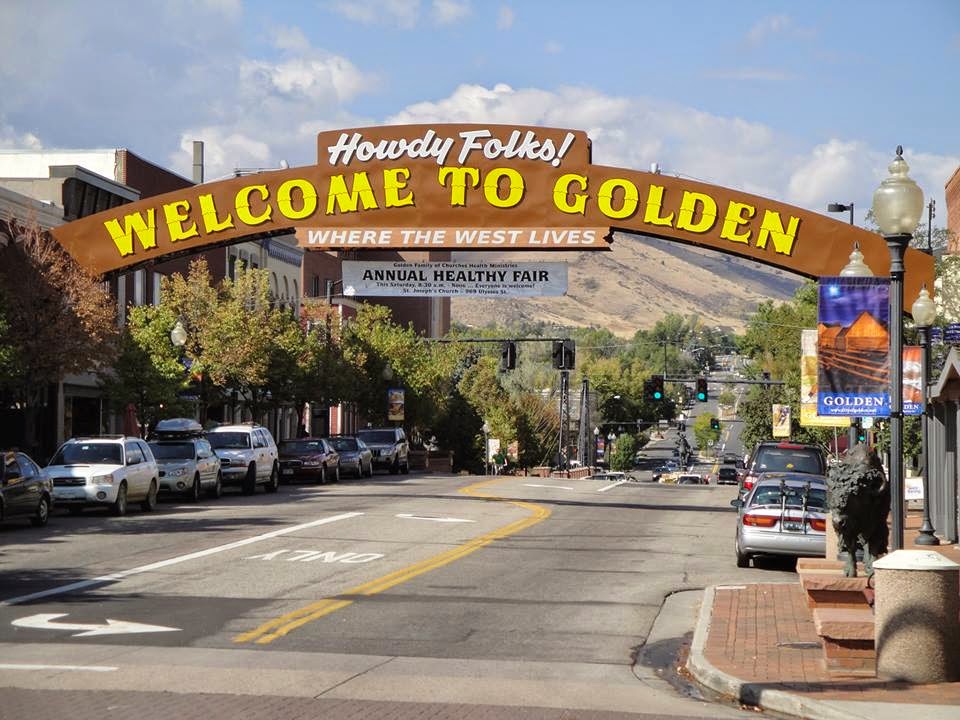 And a beautiful welcome it was, as more than 100 of us converged for our 20th Anniversary celebration conference. As always, for me, the highlight is seeing friends I've known since I joined in the early 2000s, and meeting new friends. WWW is such a supportive group. 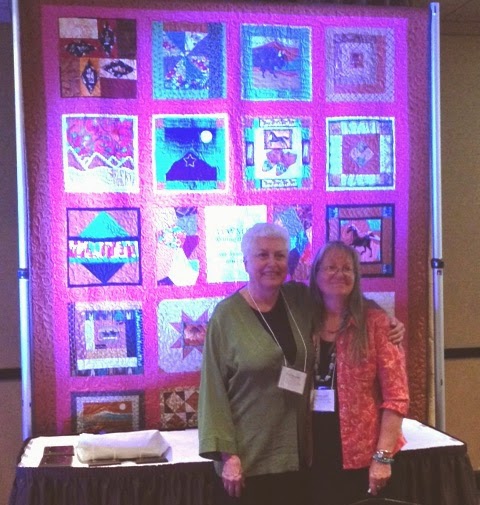 One of the features of this year's conference was the beautiful quilt, put together by Sherry Johns, with squares made by members of WWW. It was featured at the Golden Quilt Museum and we all bought raffle tickets for a chance to win. The lucky lady was Vicki Rondeau, who immediately gifted it back to Sherry! Options are being explored as to what to do with the quilt in the future. 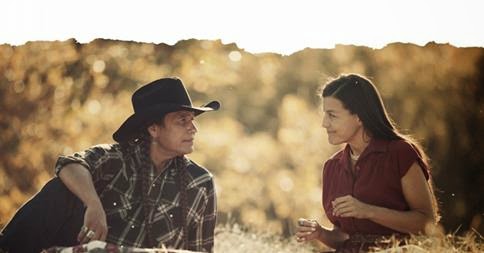 Another treat for us was the screening of the film "Cherokee Word for Water," based on the true story of Wilma Mankiller, who was instrumental in helping a Cherokee community call on traditional Native values of reciprocity and interdependence to rebuild their community. Set in the early 1980s, the screenplay was inspired by the Bell Waterline Project in Oklahoma, which was the subject of national media coverage. 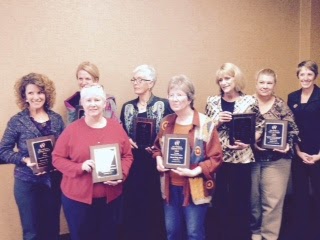 And, of course, a big part of the WWW conference is recognizing the WILLA Literary Award Finalists at a special luncheon and the Winners at the final banquet. (We will have more about these fabulous authors in a later blog). Congratulations to all!

Now, mark your calendars for October 8-12, 2015 for our next conference in Bend, OR. Jane Kirkpatrick and Shanna Hatfield have already been hard at work planning! I'm looking forward to seeing you all again!


Congratulations to the new releases this month! Join us in Golden CO this weekend for our annual conference!

Reprint and audio rights for Susan Wittig Albert’s author-published novel, A Wilder Rose, have gone to Lake Union Publishing, with a March 2015 relaunch date. The book was a WILLA finalist in historical fiction.
Susan Wittig Albert,

Andrea Downing, Dearest Darling, Wild Rose Press.
Stuck in a life of servitude to her penny-pinching brother, Emily Darling longs for a more exciting existence. When a packet with travel tickets, meant for one Ethel Darton, accidentally lands on her doormat, Emily sees her chance for escape. Daniel Saunders has carved out a life for himself in Wyoming—a life missing one thing: a wife. Having scrimped and saved to bring his mail-order bride from New York, he is outraged to find in her stead a runaway fraud and, even worse, the impostor is the sister of his old enemy…

Velda Brotherton, Beyond the Moon, A wounded warrior home from 9 years as a POW in Vietnam meets his angel. This is their battle to emotionally bring him back home from the horrors of that captivity.

Posted by Heidiwriter at 10:58 PM No comments:

The Caprock, the surface across the Texas Panhandle, is a flat, treeless expanse resistive to erosion.  Where rivers cross these Great Plains and spill over the edge to the lower elevations, erosion can create chasms.  As is the case of the Prairie Dog Fork of the Red River, which created the geological formation of Palo Duro Canyon, located south of Amarillo. Over millions of years the river has eroded down, dropping the floor by 800 feet.

“It is a burning, seething cauldron, filled with dramatic light and color”.
Georgia O’Keefe 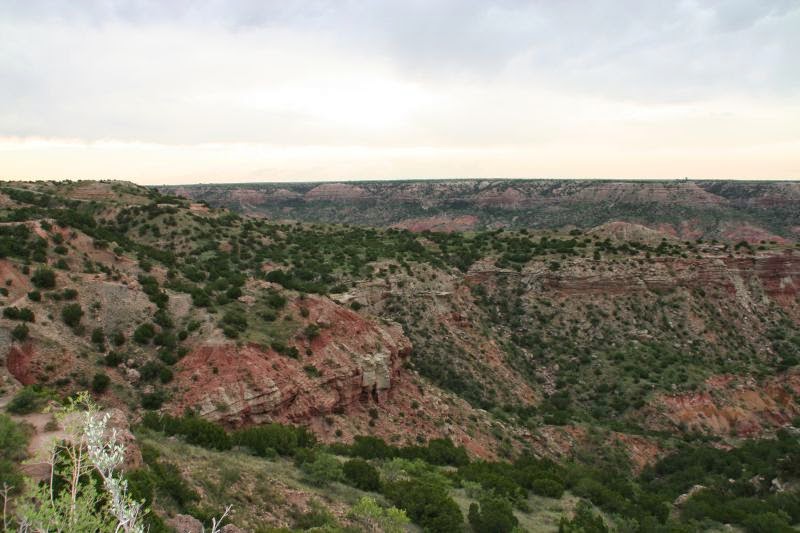 I think artists find our Palo Duro Canyon so pleasing to paint because the layers are compliments of each other. Right next to the purple layers, is the complementing yellow shale.  The Yellow shale is oxygen rich swamp deposits as opposed to the anoxic blue shale below. The off-white, or grey sandstone at the top of the Canyon is the Trujillo sandstone, or white sandstone of the Caprock.

The very top, is the white sandstone of the Ogallala, which is our major water aquifer. Here the Ogallala is exposed at the surface.  The purple and grey gravels of the Sierra Grande uplift washed down to mix with the sand giving us our major fresh water aquifer for this area.

The grey or white bed layers are actually volcanic ash from the formation of Yellowstone National park that drifted to settle in our area.  How do geologists know it is Yellowstone ash?  Through testing of the chemical compound, every volcanic eruption has a particular signature and chemical make-up unique to that one particular incident.

Murky, blue shale was deposited in this environment. The inland sea evaporated, transitioning into the Triassic swamp mud.  With rivers flowing through the area and cutting into the bright red Permian, the mixture of the Blue shale with the Permian red beds resulted in the purple shale layers seen just above the Permian-Triassic contact. 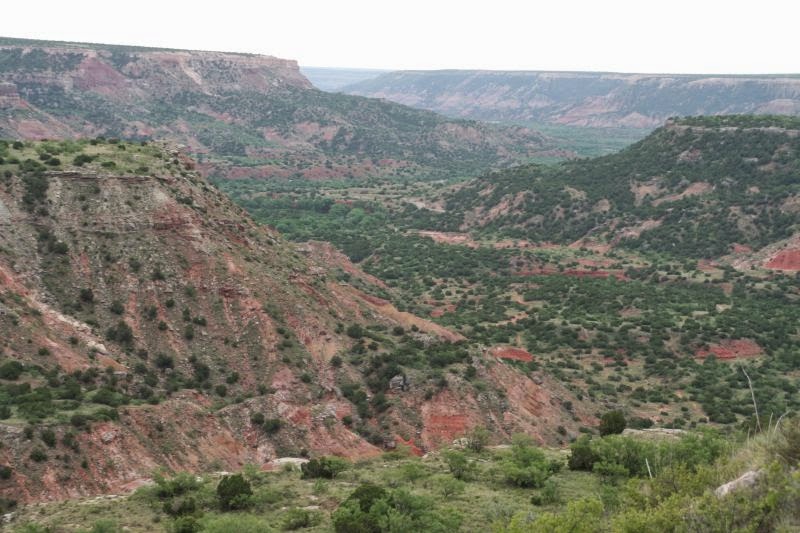 There is evidence of the depositional environment of a sea floor. This is not the massive ocean covering the earth at the time, but a small inland sea – hot, stagnate, evaporate left  white gypsum in the sea bed resulting in the gypsum rich layers you can see in the Canyon walls. At the bottom of the Canyon, the dark red is the top of the Permian, and right above that is the Triassic.

Mankind brought their own color as evidenced by rock art, bedrock mortars, points, metal weapons, and other artifacts left behind. The Clovis and Folsom peoples hunted mammoth and giant bison about 12,000 years ago. The deep chasm, abundant wildlife and flowing river provided shelter and resources for the Apache, Comanche and Kiowa.

In 1876 Charles Goodnight drove 1,600 Longhorn cattle to the canyon, and formed the famous JA Ranch along with his English partner, John Adair. The ranch grew to 100,000 head of cattle and most of the canyon belonged to the JA. The state purchased the land in 1933 and opened the park in 1934. Containing 28,000 acres, Palo Duro Canyon is the second largest park in the state parks system.