Nancy Fine’s poem, “Waiting for Sunlight” has been published in a persona poetry collection Bearing the Mask. The poem, speaks from George McJunkin’s perspective. Mr. McJunkin—a black ranch foreman in the late 1800s/early 1900s—discovered the first Folsom point site. Although he tried repeatedly to persuade experts to visit the site, it wasn’t until after his death the site was investigated. The point—which became a pivotal discovery—ultimately moved man’s early presence in North America back 7,000 years.

Ann Parker What Gold Buys: A Silver Rush Mystery (Poisoned Pen Press)  It’s autumn of 1880, and saloon-owner Inez Stannert returns to the high Rocky Mountain silver boomtown of Leadville, Colorado, only to stumble over the body of fortuneteller Drina Gizzi in the dark of Stillborn Alley. While Inez’s charming but conniving husband tries to derail her plans for divorce, Inez and Drina's young daughter, Antonia, join forces to uncover the truth behind Drina’s death. They unearth rumors of resurrectionists, white-hot revenge, and rampant greed in a town where some believe gold buys love, others, justice, and yet others, a new life… but for Inez and Antonia, it may just buy final passage into an unmarked grave.

S. D. Matley Big-G City (sequel to 2015 release “Small-g City”). Veronica Zeta, youngest child of Zeus and Hera, has at last succeeded Zeus as CEO of Olympus, Inc. She embarks on an ambitious program of corporate reform, but, when best business practices fall short, deploys a top-secret power passed on to her by Zeus. Veronica soon discovers The Power comes with a brutal price. Will Veronica survive her dream job? Can Zeus, Ex-Lord of the Universe, cope with his reduced status? And what of Ralph, retired from his structureling duties in Seattle’s Alaskan Way Viaduct? The answers lie in the City of Mount Olympus, capital city of the immortals known as Big-G City.

Andrea Downing’s short story “Long a Ghost, and Far Away” is included in the anthology, The Good,The Bad and The Ghostly. What do you get when you mix cowboys with ghosts? A collection of eight (stand-alone) amazing stories from the Old West with haunts of every variety.Ghosts are restless souls, and Lizzie Adams is one of them.  How many lives will she get to find the perfect love?

Louise Wallace’s novel originally titled Days of Eternity has now been reprinted by All Things That Matter Press with the title Length of Days.  Set against the backdrop of the Civil War, it is the first book in the story of the Edwards and Michaels families that is continued in Day Unto Day and Children of the Day. Zane and Larissa Edwards, rearing their children Mac and Rose on the family farm, foresee the future spinning out as contentedly as their past. Civil War erupts, shattering their lives and dreams.

Linda Womack, Murder in the Mile High City: The First 100 Years, describes forty-two of riveting murder cases that made headlines during Denver’s first century. The cases range from the married socialite who was the cause of the death of one of two of her lovers neither of whom was her husband to man who planted a bomb on the United Airlines plane carrying his mother, giving him the dubious distinction of being responsible for the first airborne terror attack. Wommack also examines the role played by Denver newspapers in the prosecution of the accused.

Julie Weston, Basque Moon Nellie Burns, photographer, travels to Stanley Basin of central Idaho to photograph scenes for a railroad’s brochures. When they arrive at the sheep camp, they discover the current herder is dead.  Nellie’s curiosity and photography lead her to a moonshine still and then a dash up a forested mountain. Nellie and her dog Moonshine confront the greatest challenges yet to their courage and ingenuity when they face a range war and a ruthless killer.

AWARDS
Congratulations to our 2016 WILLA Winners!

Heidi M. Thomas, Cowgirl Up! A History of Rodeo Women is winner of the Global E-bookAwards in the nonfiction-history category. When someone says "Cowgirl Up!" it means rise to the occasion, don't give up, and do it all without whining or complaining. And the cowgirls of the early twentieth century did it all, just like the men, only wearing skirts and sometimes with a baby waiting behind the chutes. Cowgirl Up! is the history of these cowgirls, their courage, and their accomplishments.

Deanna Dickinson McCall, RoughPatches, has been nominated for a Will Rogers Medallion Award, and as a finalist for the Western Music Assoc. Female Poet of the Year. This is a collection of short stories centered on women in the historical and contemporary American West. Shaped by challenging circumstances as well as the equally demanding landscapes they inhabit, the characters exhibit a brand of strength instantly recognizable to readers fortunate enough to know true "women of the West." Against long odds, the protagonists courageously stare down adversity - sexism, illness and the unimaginable dangers of both the frontier era and modern-day ranch country.

Posted by Heidiwriter at 4:04 PM 2 comments:


by Joyce B. Lohse
(Editor's Note: Part 1 of this series ran last week. The article was originally published in a 2010 WWW newsletter. This is also a tribute to Bob Foard, who passed away recently.)

Another member of our group is Bob Foard, a retired teacher, and husband of a WWW past president, Sheila Foard. The Foards live in Van Buren, Missouri. Michael Farmer, who met the Foards through Western Writers of America, says, “They’re a delightful couple. Bob has serious writing talent to go with his droll sense of humor.”

Claiming his title as Sheila’s “driver and lugger”, Bob Foard said, “A few years ago I asked Sheila what I could do to help support her WWW organization.  ‘Why don't you join?’ she suggested.  So I did and I have gotten more than my money's worth, including member discounts at the conferences. The conference panels, workshops, and expert speakers always stimulate my thinking and make my life more interesting.  Books and writers are special in my life.  Plus I got to horseback ride in the Sonoran Desert during this year's conference (the horse was named Will James).

“I am in the process of reliving and redoing my boyhood since moving back to the Ozarks. My projects list is a long one.  I volunteer for the Texas County, Missouri Historical Society and am researching my home county for a book project.  Reenacting with the Ozark Mountain Longrifleman's Mountain Man Club got me interested in frontier history in our area.

“Being a male member of a women's writing group wasn't in my bucket list.  On the other hand, I have always enjoyed doing discrepant and divergent things.  It makes me unique and sometimes I get attention and it allows me to brag.  Sheila says I need an audience.  She is right about that.  My hope is to be able to write a story or two for that audience.” 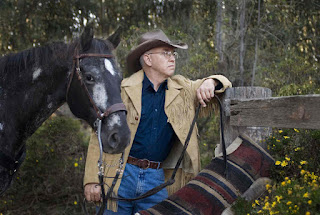 WWW member Bill J. Scott lives in Nipomo, California. According to his web site, his Angel of the Gold Rush series contains, “HARD TIMES------STRONG WOMEN------GREAT ADVENTURE. My books feature what I like to call formidable females: hotheaded, impulsive, and emotional, but very strong and possessed of great integrity and determination. Cross them and you may not live to tell the tale.”

When asked about his writing, Bill says, “My new book is titled Light on a Distant Hill.  It tells the story of Ellen O'Hara, a sixteen-year-old mail-order bride who departs Salina, Kansas in 1876 to join her husband-to-be, a cavalry officer stationed at Fort Walla Walla in Washington Territory.  But a victim of a massacre by Indians at Elko Nevada on the way, she does not reach her intended.  Badly wounded, she wanders off into the wilderness and disappears.  Is she alive or dead?  Read the book, due out in late December 2010.

“I hold Bachelors degrees from Washington State University and Brooks Institute of Photography.  I am a former professional photographer and college instructor.  I am interested in the Native American experience is America, and can claim a small amount of Cherokee blood.”

Male members, partners, family, and friends often work in partnership with us to support WWW. Sometimes, they pitch in to help the organization through their participation, assistance, and attendance. Others are silent helpers behind the scenes, leaving us to gratefully wonder, “Who was that masked man?”
###

Joyce B. Lohse, WWW administrator, writes historic biographies for Filter Press. Her books have won several awards, including two silver WILLA Awards from WWW.
Posted by Heidiwriter at 6:00 AM 3 comments: