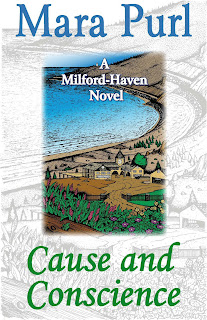 Cause and Conscience
By Mara Purl

Like a magnet, the unfinished Clarke mansion overlooking the Cove draws Deputy Delmar Johnson, battered wife Stacey Chernak, rebellious environmentalist Susan Winslow and missing reporter Chris Christian--- whose diary comes to light. And while wildlife painter Miranda Jones escapes to an entirely new adventure in Alaska, Zack Calvin tries to recover from his brush with death and sinks deeper into a tangled romance with Cynthia Radcliffe. Sally O'Mally's conscience tells her to confess an ancient sin to her old love, disabled veteran Tony Fiorentino; Zelda McIntyre proves she has no conscience at all, and the deep issues of higher purpose are tackled in the private journal of Samantha Hugo....

Hides Inside is thirteen winters—old enough to yearn to be a warrior. His brother, Standing Tall, has given him the first lesson, “A Cheyenne does not fight his own people.” Not even when other boys taunt him because he cannot speak.

On a dim night during the season of the hard face moon, Hides Inside witnesses the unprovoked attack on the Cheyenne that came to be known as the Sand Creek Massacre. His determination to join a warrior society is hardened, but will he follow Standing Tall in the ways of peace?

In her second work of historical fiction, Nancy Oswald again turns to the clash of cultures that was an inevitable part of the settling of the American frontier. Her previous novel, Nothing Here But Stones, received a WILLA Award in 2005.

"Hard Face Moon is a heartrending story of broken promises, close to the earth and sky and to the heart of the Cheyenne people. It is an important look at one of the most shameful events in the history of the American West."
– Mary Peace Finley
Author of the Santa Fe Trail Trilogy
Soaring Eagle, White Grizzly, and Meadow Lark 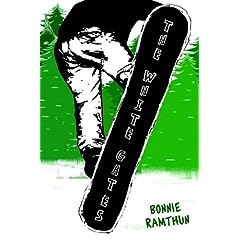 When his mother becomes the doctor in Snow Park, Colorado, twelve-year-old Torin Sinclair learns of a curse placed on the town’s doctors many years before by an eccentric Ute woman, but suspects that a modern-day villain is hiding behind the curse.

Kirkus reviews says: “Ramthun delivers fast-paced, solid entertainment that is accessible and fun and laced with plenty of facts about snowboarding on the side. A rollicking downhill read.”

The White Gates is honored as a Junior Library Guild premiere selection for 2008.

Zane and Larissa Edwards, rearing their children Mac and Rose on the family farm, foresee the future spinning out as contentedly as their past. But then, Civil War erupts, shattering their lives and dreams. Zane joins the Sixth Ohio Volunteer Cavalry and is sent to Fort Laramie in Nebraska Territory.

His friend Ethan Michaels, a widower with a young daughter, Charity, having promised Zane he will help Larissa with the work, moves to the farm as a hired hand. Ten-year-old Mac begins studying medicine under the town’s crusty doctor. But the war clutches each one in its merciless fist.

… Waiting at home, Larissa must endure the day-by-day agony of not knowing whether Zane will survive the fighting and return to her.

… Ethan struggles to reconcile his growing love for Larissa, the wife of his best friend, with the trust Zane has put in him to watch over his family until he returns from war.

…With the war threatening to destroy all Mac holds dear, even his dreams of becoming a doctor are caught in its unrelenting grip.

Chipeta: Ute Peacemaker is the eleventh in the Now You Know Bio series from Filter Press. Chipeta was a member of the Tabeguache band of Utes and wife of Chief Ouray. She was partner to her husband during a time of expansion by white settlers into tribal homelands and transition from nomadic lifestyle to settlement on reservation lands. After Ouray's death, Chipeta continued as a leader of her people and a force for conciliation and peaceful resolution of conflicts.

Author Cynthia S. Becker collaborated with P. David Smith on an earlier biography, Chipeta: Queen of the Utes, published by Western Reflections in 2003.

Hearts On The Wind

Unwittingly they become embroiled in a triangle of passion, deception, and revenge when their love pits them against Andreas’ stepsister and the turmoil of the Great Chicago Rail Strike.

"For a peek into the early years of the railroad industry and a heartwarming story of love and the struggle to maintain it, don't miss HEARTS ON THE WIND."
~ Romance Reviews Today

“A well-researched novel about the early days of the

"Anne Marie's New Melody," my latest novel has been released. It is the last in the series of three northwest women and the retirement choices they make. It is now available through some independent book stores and through www.bbotco.com as well as other on line sources.
Posted by Jo-Brew at 7:36 PM No comments:

The Search for Justice
By Judy and Ronald Culp

Tilman Wagner is back, this time with his new wife Catherine and her son. In response to a telegraphed plea for help from Catherine’s sister-in-law, Esperanza, the new family is on their way to the New Mexico Territory to help Catherine’s brother try to save his land and his family from greedy cattle rustlers and no-account lowlifes.

They get more than they bargained for in the form of a wayward son’s rage against his father, a stolen herd of cattle, and some unsavory citizens of the Texas cattle town of Tascosa. The roots of greed extend to Santa Fe where dishonest men are hard at work to skin the family out of its land.

Along the way, Tilman calls in a favor from cattleman John Chisum at the Bosque Redondo. Once again, Butter Pegram is on hand to help Tilman in his attempts to aid a frontier family struggling with their search for justice.

This is the third book in the Telegraph Series and is due for release on October 21, 2008.

Posted by juliepollitt at 11:21 AM No comments: