Michigan & Rookie
by Joaquin Guerrero
as told to Barbara Mershak
It’s been said there is no bond greater than between a K9 handler and his partner. In Saginaw, Michigan—a city plagued with gang violence, Officer Joaquin Guerrero sensed God’s call to work the dangerous night streets with his K9 partner, Rookie. On 9/11 Guerrero responded to Ground Zero with Rookie and for seven long days the pair worked “The Pile” with a never-give-up spirit. Michigan and Rookie is a dog story, a cop story, a Ground Zero story, and a faith story.

Michigan and Rookie: Guardians of the Night is available at Bookhouse Fulfillment through Beaver’s Pond Press at Bookhousefulfillment.com
Visit Barbara at www.barbaramarshak.com and http://barbara-hh.blogspot.com 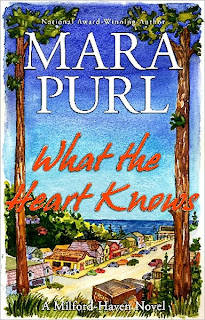 What the Heart Knows
A Milford-Haven Novel
by Mara Purl
Miranda Jones  has always used her head. Her artist’s rep and mentors, parents and sister, always advised she must. With her paintings at a major fine art gallery, her journey as a struggling artist is finally paying off. But while her head told her success in a big city was what she wanted, her heart told her a simpler life in a small community would feel like home. Now that she’s moved, deeper questions surface: What is her life purpose? What’s missing? And what does her heart know that her head keeps ignoring?
California’s Central Coast  is  growing explosively. Now, in the mid-1990s, tourism is up, but so are environmental regulations.  Housing is on the rise, but so are water restrictions. Gambling is limited, but the Chumash tribe lobbies for a gaming casino. The stock market is booming, the upwardly mobile are pouring out of Los Angeles in search of a fresh start, or a weekend getaway. In these affluent, pre-9-11 days, it’s a time of infinite possibilities.
Milford-Haven is a town full of characters. Escapees from San Francisco and Los Angeles, New York and Arkansas, Montreal and South Africa, have come here with their own  hopes and expectations, agendas and shadowed pasts. The stakes are high: create a new life from scratch. The opportunities are dazzling: own a piece of the California dream. It’s a town of buried secrets and a dangerous mystery, quaint shops and breathtaking vistas, peaceful solitude and spontaneous conversations. What draws people here is the sense that—in their heart of hearts—they know there’s something they’ve always wanted to do. And if not now . . . when? So look for the sign to Milford-Haven, pull off Highway 1 and stop by. Come discover for yourself . . . What the Heart Knows.
Order from Amazon or Barnes and Noble.
Visit Mara at www.marapurl.com
____________________________________________________ 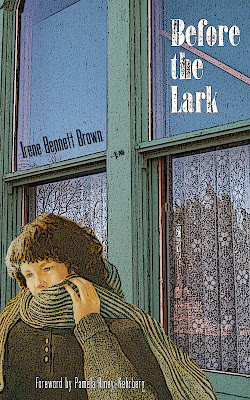 Before the Lark
In a new edition from Texas Tech,
a classic novel of the American Midwest

by Irene Bennett Brown
It is 1888 and Jocey Royal lives with her ill grandmother, a washerwoman, in Kansas City, Missouri. Since her mother’s death, Jocey’s father has become a drifter. Twelve-year-old Jocey, the target of torment due to her cleft lip, no longer goes to school but she reads and out of her books come dreams. In particular she dreams of the farm her father abandoned in Kansas. On the farm, no one would ever see her. Eventually she talks Gram into going there with her.
Life on the farm is not what Jocey expected. The work is hard as she knew it would be. But there are neighbors and traveling salesman that cannot be avoided. There are problems with Gram who is determined to be an invalid, though she is not one.
Jocey wonders of she made the right decision, until the friendship of a young neighbor and his family shows she can have friends despite her facial disfigurement. And finally, the hope for an operation further opens new vistas for the plucky girl.
A Junior Literary Guild Selection, Bank Street College choice for Best Books for Children, and winner of the Western Writers of America Spur Award for Best Western Juvenile Book. 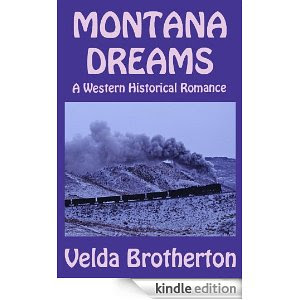 Montana Dreams
A Western Historical Romance
by Velda Brotherton
One her way from Kansas City to Virginia City, Montana, Dessa Fallon is kidnapped by outlaws. She escapes into the arms of Ben Poole. She learns her parents have perished in a fire and that they had information about her brother, who was thought killed in the war.
Sheltered by her family's wealth, Dessa must learn to survive in the Big Sky Country which she comes to love. She and Ben search for her brother and build a new life together.
The book is available at Amazon.
Visit Velda at www.veldabrotherton.com
A Kindle release by Velda Brotherton
Posted by juliepollitt at 12:25 PM No comments: