Why am I so obsessed with a man who died in 1924 that I've worked for years to give him the attention he deserves?  For one, pioneering writer Homer Eon Flint was my grandfather. It’s only natural I’d be drawn to another writer, especially one whose violent death at age thirty-six impacted his family for generations. 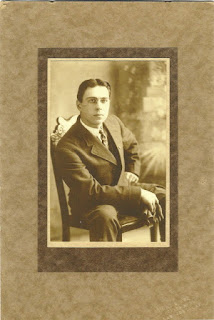 Grandpa made his initial impression on me when I discovered his writing in boxes stored in my Nana’s closet. Several stacks contained yellowing typed manuscripts while others were pulp magazines with his published work. I would pour though those fragile magazines with their lurid covers showing maidens in jeopardy, dashing heroes, and evil villains. Grandpa’s mostly science fiction had such titles as The Queen Of Life, The Lord Of Death, The Man In The Moon, The Planeteer, The King Of Conserve Island, The Emancipatrix, and The Devolutionist.

His work was read by millions. In Everett Bleiler’s “Science Fiction: The Early Years,” Grandpa was called, “in many ways the outstanding writer of s-f in the Munsey pulp magazines because, although his writing was at times variable, it was always exciting and teamed with ideas way ahead of their time.”

Nine months before his death, the family had been living in San Jose, California. Neither his day job nor the writing paid enough to support the family so Nana took a teaching job in a remote mining/logging community. She, my five year old mother, eight year old uncle, and two year old aunt moved over 200 miles away while Grandpa remained behind and moved in with his sister. Husband and wife wrote each other several times a week, and Nana kept every letter he sent her. After his death, she took back the ones she’d written to him. She also held onto much of his correspondence with editors, agents, and writing friends.  For years my mother had that precious material but it eventually came to me.

Much as I wanted to hold onto what I consider a big part of my heritage, not only was everything becoming fragile, it bothered me that his legacy was relegated to my attic. In time I connected with the research library at the University of Kansas and sent several boxes of material to them, but the understanding that I had unfinished business remained. I wrote Grandfather Lost, a biography of his short life that includes everything I could uncover about

his tragic end and the subsequent police investigation.

The internal nagging continued. Then I began corresponding with one of the owners of Musa Publishing and shared my dream of giving new life to Grandpa's fiction with her. She agreed. In fact, she'd read some of his most famous stories. Month by month we worked together to bring out his stories in ebook form and I started to feel as if my job was nearly done.

Then Musa was forced to close their doors. Shocked, I grabbed Word copies of all those stories and emailed my contact at the University of Kansas asking if she'd suggest any publishers who might be interested in older material. She mentioned several, Wildside Press at the top. I emailed the owner letting him know what I had. The next day he emailed back and we were off to the races. Now, under one massive title, every piece of fiction my grandfather wrote plus the biography is alive. My job is done.
Hopefully.

Vella Munn’s dream of her grandfather’s writing coming back to life has been realized with the release of The 26th Golden Age of Science Fiction Megapack. Homer Eon Flint wrote fiction for the pulps before he was murdered at age 36. This publication includes both his published material and the manuscripts Vella has long had in her possession. Included is Grandfather Lost, Vella’s biography about the man she never met.
Posted by Heidiwriter at 3:32 PM

Vella, it is obvious you were meant to write this book. What an honor and amazing man your grandfather was. Your dedication to this project must make you feel a huge accomplishment. A job well done!