The Loretto Chapel of Santa Fe 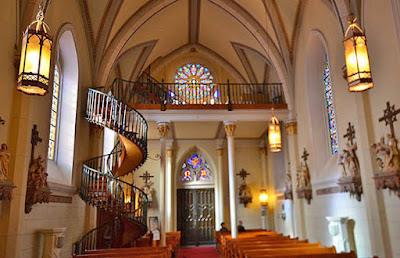 The Loretto Chapel in old Santa Fe is as mysterious as it is beautiful. While attending the Women Writing the West writers’ conference, I joined our group on a walking tour of the old Santa Fe’s historic district. The highlight of that tour was the Loretto Chapel.

Loretto Chapel was almost completed in 1878 when the builders realized the chapel had a major flaw: there was no access to the choir loft twenty-two feet above. Carpenters were called in to address the problem, but they all concluded that building a staircase would take too much space from the limited seating of the small chapel, and that the only access would be a ladder. 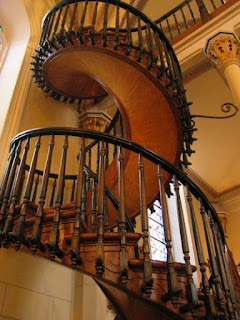 The Sisters of the Chapel made a novena to St. Joseph, the patron saint of carpenters. On the ninth and final day of prayer, a man appeared with a donkey and toolbox looking for work. He had two requirements: that he work completely alone and that the nuns furnish vats of hot water several times a day. They honored his request.

Months later, on the appointed day, the nuns entered the chapel to find an elegant circular staircase with two 360-degree turns and no visible means of support. The staircase was built without nails, only wooden pegs. Mysteriously, the carpenter disappeared without pay or thanks.

The staircase was said to sway slightly and ten years later banisters were installed for safety in climbing to the loft.

Today the chapel is now a private museum and maintained for the preservation of the Miraculous Staircase and the Chapel itself. In addition to serving as a museum, the Chapel is a popular site for weddings. 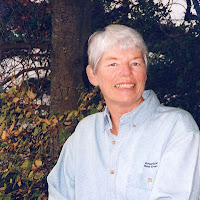 Mary E. Trimble is the author of two memoirs, SAILING WITH IMPUNITY: Adventure in the South Pacific, and TUBOB: Two Years in West Africa with the Peace Corps, plus three contemporary western novels, Tenderfoot, McClellan’s Bluffand Rosemount. In addition, she has written 400+ magazine and newspaper articles on sailing, RV destinations, disaster preparedness, and items of interest to homeowners. She recently retired after serving 20 years as a volunteer with the American Red Cross. Trimble lives on Camano Island, WA with her husband, Bruce. www.MaryTrimbleBooks.com

A very good book by Santa Fe historian Mary J. Straw Cook is titled Loretto, The Sisters and Their Santa Fe Chapel. She tells the history of the chapel, the staircase, and also solves the mystery of the carpenter.

What a beautiful chapel! I'm so sorry I missed the Santa Fe conference. I would have loved to have seen it! Thanks for sharing, Mary!

Mary, As usual, you have written a concise and informative commentary on an interesting subject. Thank you!

Wow, this is a fantastic story--wish I had been able to go see that. Thanks for sharing it with us!

Wow, this is a fantastic story--wish I had been able to go see that. Thanks for sharing it with us!