What a great lineup of new novels and awards this month! Congratulations to you all!

Janet Fisher, The Shifting Winds (Globe Pequot Press/Two Dot) Jennie Haviland’s father takes the family west over the Oregon Trail in 1842, tearing Jennie away from her prestigious academy in New York and forcing her to face a lonely wilderness across the continent. In Oregon she meets two young men, handsome British Hudson's Bay Company clerk Alan Radford and brash American mountain man Jake Johnston. The two vie for her as their nations vie for this rich contested territory, but Jennie wants choices of her own.

Bonnie Hobbs, Sweet Justice. Wounded by her fiance's betrayal, Rachel Logan returns to her father's ranch in Arizona Territory determined to live an independent life. Kol Hawk comes home after ten years in Yuma Prison for attempting to kill Rachel's father, believing him responsible for the deaths of a Pima woman and her daughter. As they come together to find the truth, can they also find solace in each other?

Sarah Byrn Rickman, WASP of the Ferry Command (University of North Texas Press) is the personalized story of the women pilots who, when qualified male pilots were in short supply early in World War II, volunteered to fly brand new trainer aircraft from factories to the training fields in Texas and elsewhere. Then the women's job changed dramatically when, in January 1944, they were needed to deliver sleek, powerful P-51 fighter aircraft to the docks at Newark, NJ, for shipment to the war zone. Ultimately, those P-51s were the key to the victory over the German Reich because they had the range to escort and protect the four-engine bombers on raids all the way from England to Berlin and back.
Enter code 3B at checkout for a 30 percent discount. The code will expire on 4/3/2016.
AWARDS

Julie Weston, Moonshadows, won Finalist in the May Sarton Literary Award in the category of historical fiction.

Donis Casey, All Men Fear Me, is a finalist in the fiction category for the 2016 Oklahoma Book Award. 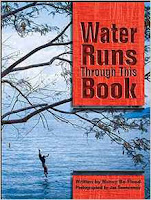 Nancy Bo Flood, Water Runs Through This Book (Fulcrum, photographs by Jan Sonnenmair), an informational book about the wonder of water and the need for conservation, has been recognized as a Green Earth qualified book.

Nancy Bo Flood, Soldier Sister, Fly Home, (Charlesbridge, cover art by Shonto Begay), is a Junior Library Guild selection,. This contemporary middle-grade novel is a celebration of family, riding horses pell-mell in the dark, sharing secrets with a sister, and the beauty of the Navajo desert.

Posted by Heidiwriter at 4:01 PM

Thank you, everyone, for creating this organization and for it's support and recognition of Women Writing the West!

Some wonderful words by inspired writers. Thank you.

This is such a wonderful supportive group. Thank you all.

Kudos to all who have received awards and mentions! Proud to "know" you all!

Blogging tips and more that focus on fresh news and information about strategies to increase website traffic, revenue, related tips and other engaging topics that lead to being more informed and hopefully to a greater presence online.
blog sites