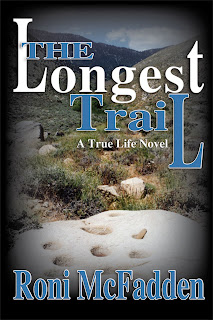 The Longest Trail
by Roni McFadden

"The Longest Trail" carries readers through a spellbinding new work by Willits, CA author Roni McFadden. As a young teen, McFadden left behind the confusion and pain of her unhappy preteen years. She tells of how she went up ~ up onto horses, up the road to a man who could help her, and up the mountain, to where she could see clearly and breathe deeply. And, finally, up to another place where only some can go. As she travels "The Longest Trail", Roni evolves from a girl stumbling along treacherous and twisted paths to become a strong young woman who knows where she is going, how to get there, and understands she will have help along the way. Her route took her over "The Longest Trail", through life, until she arrived here, now. Having had the visions, seen the petroglyphs, felt the grinding stones, and carrying obsidian chips with her, McFadden knows the strength of the spirits of the ancients, knows their energy can be used by anyone who feels their vibrations.

Spending all of her teen years in the High Sierras riding horses and managing horse-packing tours, Roni learned about animals, people, and life. In the time since then Roni has continued on "The Longest Trail", adding the wisdom of another 40 years to her perspective as she relives, and recreates those years on the pages of The Longest Trail.

As you ride with McFadden up the trail in this book, you will know the joy, fear, grief, humor, beauty and wonder she experienced in the high country, in Altadena, and all along the way, as she journeyed to this time and place by way of "The Longest Trail." In addition to Roni’s story, a reader can find amusing and valuable travel tips for one's own journey on "The Longest Trail."

The Longest Trail can be purchased at Amazon.com