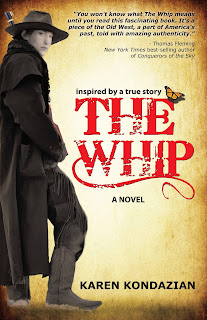 The Whip
by Karen Kondazian

The Whip is inspired by the true story of Charlotte “Charley” Parkhurst (1812-1879) who lived most of her extraordinary life as a man in the old west.

As a young woman in Rhode Island, she fell in love with a runaway slave and had his child. The destruction of her family drove her west to California, dressed as a man, to track the killer.

Charley became a renowned stagecoach driver for Wells Fargo. She killed a famous outlaw, had a secret love affair, and lived with a housekeeper who, unaware of her true sex, fell in love with her.

Charley was the first woman to vote in America in 1868 (as a man). Her grave lies in Watsonville, California.

The Whip is published by Jon Hansen of Hansen Publishing
http://hansenpublishing.com/


You can visit Karen at the following sites:


The Whip can be purchased on the following sites:


Karen will be touring and signing books at the following locations and dates:

Posted by juliepollitt at 2:12 PM