Eds note: The tour of the Arabia Steamboat Museum was such a popular and inspiring part of the recent Women Writing the West Conference in Kansas City (MO), that two members wrote about it for the blog. Here's Past-President Pamela Tartaglio's look at the tour. (Author/Member Mary E. Trimble wrote Post I.)

In the film at the Arabia Steamboat Museum, two family members recall their excitement when they unearthed the first barrel, buried for 132 years. Not only did the heavy cask deep below a corn field suggest they had found the steamboat, but the contents dazzled them. It was packed full of china, including Wedgewood, which the Arabia had been known to carry that day.

One discoverer recounted in the film how the family went home and stayed up late into the night, thrilled with their find and the promise of the 200 tons of cargo to be retrieved. On that night they decided that they would not sell any of the items because they were a record of life at the edge of the frontier. According to the museum, this is the largest single collection of pre-Civil War artifacts in the world.

More than two tons of metal tools and hardware were recovered. A filled toolbox suggests a skilled worker lost the means of his livelihood when the Arabia sank. The more than 4,000 boots and shoes found on the steamship, lost in 1856, may have created a shortage and hardship at that time.

Some of the items are obsolete.
After lunch, the WWW tour bus left the Steamboat Arabia Museum and passed the Central Library’s parking structure, which resembles a shelf of famous books.
Many thanks to those responsible for the 2013 Women Writing the West Conference!

2013 Past-President Pam Tartaglio served as chair of the WILLA Literary Awards and enjoyed presenting trophies and plaques to the authors of the 2013 Winners and Finalists. She writes about the arts, history and places on her blog.
Posted by Susan J Tweit at 6:26 PM 7 comments:

Eds note: The tour of the Arabia Steamboat Museum was such a popular and inspiring part of the recent Women Writing the West Conference in Kansas City (MO), that two members wrote about it for the blog. Here's author/member Mary E. Trimble's post. We'll also hear from past-President Pamela Tartaglio.

In 1856, the 171-foot-long, side-wheeler steamboat Arabia sank to the bottom of the Missouri River when her hull was pierced by a submerged tree, taking with it 200 tons of brand new store merchandise. The snag ripped open the hull which quickly filled with water. By the next morning, only the smokestacks and pilot house remained visible. Within the next few days, all remaining traces of the boat disappeared from sight. Numerous attempts to salvage the boat and her contents were attempted but, it appeared, all was lost. Although there were no human casualties, a mule that was tied to sawmill equipment went down with the ship.

Over time, the Missouri River changed its course, leaving the Arabia buried deep in the mud of a farmer’s field. In 1987, Bob Hawley and his sons Greg and David set out to find the boat. Using old maps and a proton magnetometer to figure out the location, they finally discovered the Arabia half a mile from the current river, under 45 feet of silt and topsoil.

The owners of the farm gave permission for excavation with the provision that the project be completed before spring planting. In November 1988, the Hawleys, along with family friends Jerry Mackery and David Luttrell, began the recovery task while the water table was at its lowest point. Heavy equipment was brought in including a 100-ton crane and 20 irrigation pumps to keep the site from flooding, Within days, goods were recovered, all in remarkably good shape. A wooden crate filled with elegant china was so well preserved even its yellow straw packing material was still intact. Pickles sealed in a wooden barrel were still edible.

In February 1989, work ceased at the site and the pumps were turned off. The hole filled with water overnight.

Although the site of the sinking is near present-day Kansas City, Kansas, the cargo and remnants of the ship are now housed in The Arabia Steamboat Museum in Kansas City, Missouri. The museum houses one of the most remarkable collections of pre-Civil War artifacts in the world. Each piece has been carefully cleaned, categorized and attractively displayed. The collection is still a work in progress as preservationists continue to clean remaining artifacts.

The Arabia Steamboat Museum is a fascinating collection of goods including European dishware, jewelry, guns, tools, clothing and food products,. The attractive displays are works of art with items exhibited on furniture replicas, effectively creating a time-capsule of frontier life in the 1800's. 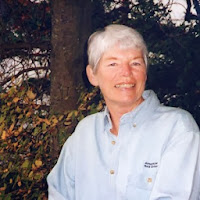 Mary E. Trimble has lived in sub-Saharan Africa in the Peace Corps (the subject of her memoir, Tubob), cruised the South Pacific for two years in a 40-foot sailboat with her husband, Bruce, and written three contemporary Westerns set in the Pacific Northwest, Tenderfoot, McLellan's Bluff, and Rosemount. She and Bruce live on Camano Island, Washington.

Speaking of Clichés: Going to Kansas City was a kick!

Women Writing the West past-President Sheila Wood Foard, author of the WILLA-winning YA novel, Harvey Girl, came back from the WWW conference in Kansas City inspired (and full of fun!).

Where else, besides a Women Writing the West conference, can you chat with people of your own kind? People who speak the same language using words like plot, proposal, blog, platform, narrator, setting, writer’s block, rejection, alliteration, and social media while touting the importance of including sensory images in describing the western landscape even as they caution against using –ly adverbs, dangling modifiers, fragments (like the one you are now reading), and clichés when you draft your next story?

Speaking of clichés, Brian Shawver, presenter of the Language of Fiction session, reminded us of the well worn warning we first heard in a middle school English class: Avoid Clichés Like the Plague! Then he kicked it up a notch by discussing examples of clichés from literary works being used effectively. At the moment, I can’t quote any of his examples, but I plan to buy his stylebook on Kindle so I can from now on.

Again speaking of clichés, I recalled Dolly Parton’s song titles and lyrics. Now there’s a woman who writes the South well. Why couldn’t I get rich writing clichés like Dolly? Maybe one reason is I can’t carry a tune in a bucket. But I’ve always admired Dolly’s spunk, if not her use of English. 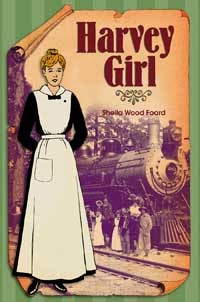 My fervent hope is that the awesome Kansas City Conference (thanks to LaDene Morton and her WWW sidekicks) will be a kick in the pants for my own writing of the West. I’ve been kicking my next novel down the road for far too many months. Now it’s time to kick my ruby slippers together (the way Dorothy, a.k.a Judy Garland, did to get out of the Emerald City in Oz and travel home to Kansas, which was faster than steaming up the Missouri River on the Steamboat Arabia) and finish the sequel to Harvey Girl. (At least I have a working title: Girl Courier on the Indian Detours.)

Hey, did I mention that many of the Harvey Girls (the real ones, not those of that other Judy Garland musical fame) were hired at the Fred Harvey Company offices at Union Station right there in Kansas City? One way to kick start your writing is to revisit the landscape of your first novel. Right? Write! This is no time to kick back unless it’s in my computer chair.

Sheila Wood Foard writes for young readers. Her historical novel Harvey Girl (Texas Tech Press) won a WILLA Literary Award as well as taking First Place in YA Fiction Books in the National Federation of Press Women contest. Past President of WWW, Foard is an e-instructor for the Institute of Children’s Literature.
Posted by Susan J Tweit at 1:06 PM 5 comments: