The 38th Annual Willamette Writers Conference is being held, August 3-5 at the Airport Sheraton in Portland, Oregon. The Writers Faire, open to the public, is at the same location on Thursday evening from 6-9pm. Sixty northwest authors will be there to sell and sign books. Jo-Brew 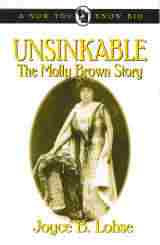 "Unsinkable: The Molly Brown Story" is my fourth biography, and the third I have written for the "Now You Know Bio" series from Filter Press.


Readers enjoy it on many levels. Young people can use these books for reports because of the research involved and the required non-fiction elements included, such as glossary, timeline, bibliography, index, and so on. Adult readers like these biographies because they are a quick, fun, and easy way to learn elements of history in a researched format they can enjoy and trust for historic accuracy.


The book recently received a silver CIPA EVVY award in the 2007 juvenile division. CIPA is the Colorado Independent Publishers' Association. My books are special because I work hard to bring history alive for the reader while incorporating my journalism degree and genealogy background with my intensive research methods. I dig for quotations, so the character can speak in his/her own voice, and I use historic photos and graphics contemporary to the life of the subject. For instance, although the "Unsinkable" topic is not new, this book contains newspaper graphics which have not seen the light of day since the Titanic sank in 1912. It stands out for its non-fiction format, which includes previously overlooked elements of Mrs. Brown's life.

Contact the author and buy the book here and join us at our reading forum. Discussion is open to the public and for anyone who loves historic writing. ~ Mod.
Posted by Dani at 4:37 PM No comments:

Our Willamette Valley is a lush stretch of green running through the northern third of Oregon between the coastal mountains and the Cascades. It is the place where my life is centered. From my home on the outskirts of Eugene, I travel through farm country in any direction. Most often toward the north where I have grown children and grandchildren.

Watching the seasons change on the farms as I passed by began to stimulate interest and questions. One particular farm house, located some distance back from the road intrigued me. There were no neighbors as far as I could see, just fields with changing crops. I seldom saw anybody around, never a woman but the house and small yard appeared well tended. When I returned from a grandchild's band concert or activity after dark, the single light glowing at the end of the long driveway was the only visible landmark on the unlit main road.

It seemed natural when my wondering about life in that house led me to create a story. That story of Cleo, a farm wife, became my first novel.

Never having lived on a farm, I began the framework from conversations with two older friends who had been farm wives. Many of the details of day to day farm life came from the two but the character of Cleo's mother-in-law, Edna, came from experiences in my teen days picking strawberries in a local field.

As the story grew, so did my need of knowledge. I began reading articles in the Country Life magazine, hung around the women at the Lane and Benton County Fairs, went to a few 4H meetings with my grandchildren, a few Grange events and made regular trips to the fruit and vegetable stands along the back roads that connect our farm towns. I talked to the extension service, to the local honey plant and to any of the farmers at the local farm store who were willing to spend time answering questions.

I spent time in each of those nearby farm towns before I decided which would be the center of life for Cleo and her children. I liked several but Harrisburg, about an hour north of my home, had the community feel I wanted.

As Cleo's story developed and my research went on, a secondary and larger theme overtook the tale. From one woman's struggle to survive in a culture she didn't understand, I discovered the need to bring the plight of the family farmer to the attention of readers. Hopefully the women who live and work in the city, buy their processed food at the chain stores and skip over the farmers market and fairs in favor of other entertainments.

I met with teachers who work to support their families and the farm they live on, farmers who work a second job at night, women who work in the neighbor's produce stand and women who spend two or three days a week as salespeople at the farmers market in the city.

Even the farms that set up the roadside markets need to have more than what they've grown. One farming family is partially supported by the nursery business the wife began while the men grew the traditional crops. Down the road from that historic farm, another plans special activities to attract more people. Senior retirement centers bring busses so the residents can shop and have lunch from a portable hot dog stand, finishing with ice cream and homemade pie. All summer children can feed the goats, visit other farm animals and play on the playground. The season ends with a computer planned corn maze, horse drawn wagons to the pumpkin patch and lots of cider. The production of crops is no longer enough. To succeed the farm family must have another source of cash flow and/or learn and practice sharp new business skills.

When my Preserving Cleo and the sequel, Cleo's Slow Dance, were both on the market, I felt like I'd told a tale of a woman's growth and put it in a vehicle that illustrated a major dilemma in our contemporary life style. Were I to do it again, I'd choose to pass on a stronger message as I see more people who are ready to listen. www.Jo-Brew.com http://jo-brew.blogspot.
Posted by Jo-Brew at 4:17 PM 1 comment: