Women Writing the West members, don't delay: You've got one week left to enter your short fiction in the 2013 LAURA contest. (Entries are due by April 30th, 2013.) Five winning entries will be announced at a special luncheon at the 2013 Annual Conference in Kansas City, and will be published in the online LAURA Journal. Read more on the Member News page.


Women Writing the West at the L.A. Times Festival of Books

April 20 and 21st was a big weekend for Women Writing the West, says WWW Past-President and WILLA Literary Awards Pamela Tartaglio, when an estimated 150,000 people attended “the nation’s largest literary event," including a booth promoting WWW and its members. Read more on the Member News page.
Posted by Susan J Tweit at 6:02 PM No comments:

I am a non-native living on an Indian Reservation; to be exact, the Colville Confederated Reservation in Northeast Washington State. We have been here for two and one-half decades. I followed my husband to the home of his father’s family after we completed collage at Eastern Washington University in Cheney, WA.

My husband and sons' band is the Sinyekst or Sinixt people.  This translates to the "Speckled Fish" people or Place of the Bull Trout.  They are currently referred to as the Lakes People. Here are five quick facts about the Lakes people:

On my blog, I am posting a series on the life of the Lakes people as it has been taught to me before cell phones and video games. When children roamed the mountains and shores of the Columbia River learning to hunt and gather roots and berries. A simple life. A life fulfilled.

Carmen Peone has lived in Northeast Washington, on the Colville Confederated Indian Reservation for twenty-three years. She had worked with a Tribal Elder, Marguerite Ensminger, for three years learning the Arrow Lakes Language and various cultural traditions. With a degree in psychology, the thought of writing never entered her mind until she married her husband and they moved to the reservation after college. She came to love the people and their heritage and wanted to create a legacy for her sons.
Posted by Susan J Tweit at 4:42 PM 8 comments:

The story behind the WWW logo

Have you ever wondered what Women Writing the West's beautiful logo stands for? Here's the story, excerpted from Celinda Reynolds Kaelin's explanation on the WWW website.

An eagle, a hand and a star. ... Women Writing the West's logo is a composite of traditional symbols filled with native numinous energy. At first glance, we see a gracefully arched, stylized eagle that seems to hover above a left-hand print. American Indians observed that eagles fly higher than any bird, and they therefore considered them to be messengers from the Creator. Most creative people that I know are quick to acknowledge that the inspiration for their work comes from a higher power, much as the eagle is thought to bring wisdom from Great Spirit.

Traditional Elders teach that at the moment of birth, when the first breath is freely drawn into the lungs, the Creator breathes the spirit or soul into each individual. This spirit then resides within the heart until released at death, and therefore the left, or "heart hand," carries special significance. When greeting one another, traditional American Indians proffer their left hand for the handshake as it is thought to come from spirit (the heart) and therefore to be more sincere. When attesting to the validity of a thing, the left hand is dipped in red paint and the resulting palm print is affirmation from the very soul. It is the essence of truthfulness.

Winter Count societies (historians) were common to most of America's indigenous people. Buffalo hides were painted with the symbol of each year's seminal event, and this then evoked the entire story or history of that "winter." The historians recording these events were chosen for this honored duty on the basis of their reputation for being truthful. ... And now we have women writing about America's west, past and present, with our WWW logo prominently displaying the left-hand palm print of truthfulness.

Five small white circles adorn each of the fingers on this hand, perhaps reflecting the traditional symbol for hailstones. Hailstones themselves are used to symbolize the Thunder Beings, one of the most powerful spiritual energies. Thunder Beings come from the west, where all spirits reside, and carry precious water – "That which gives life."

This left palm print on our logo is further enhanced at the wrist with the symbol of mountains. American Indian cosmology teaches that "As it is above, so it is below," and the angular forms of mountains are used to represent this teaching. ... Our storytellers, like the elders in a winter camp, pass along wisdom as they entertain with their myths and legends and tales. This is how the next generation is taught.

In the center of our logo's palm is a circle, referred to as the Sacred Hoop among traditional American Indian people. It is considered sacred for the Oneness that it represents – "We are all Related." This essential understanding mandates a respect for all people, not just two-leggeds (humans) but tree people, star people, stone people, four-leggeds, etc. And because of this Oneness, and the respect it engenders, it also represents a universe in balance. This is further enhanced by the native cross, the four directions symbol at the center of the circle. This symbol embraces all races of people, the people from all the directions of the earth, and in the center is the point indicating a meeting of the Above and the Below (heaven and earth).

What a wonderful legacy for women's voices. WWW is represented by a symbol that speaks for all the founding principles of our organization. ...

Celinda Reynolds Kaelin, granddaughter of New Mexico pioneer John Allen Reynolds, writes and lectures extensively on the American Indian. She is the author of American Indians of the Pikes Peak Region, and Pikes Peak Backcountry: The Historic Saga of the Peak's West Slope.
Posted by Susan J Tweit at 6:26 PM 5 comments:

Here's the monthly round-up of news from Women Writing the West members. Congratulations all! 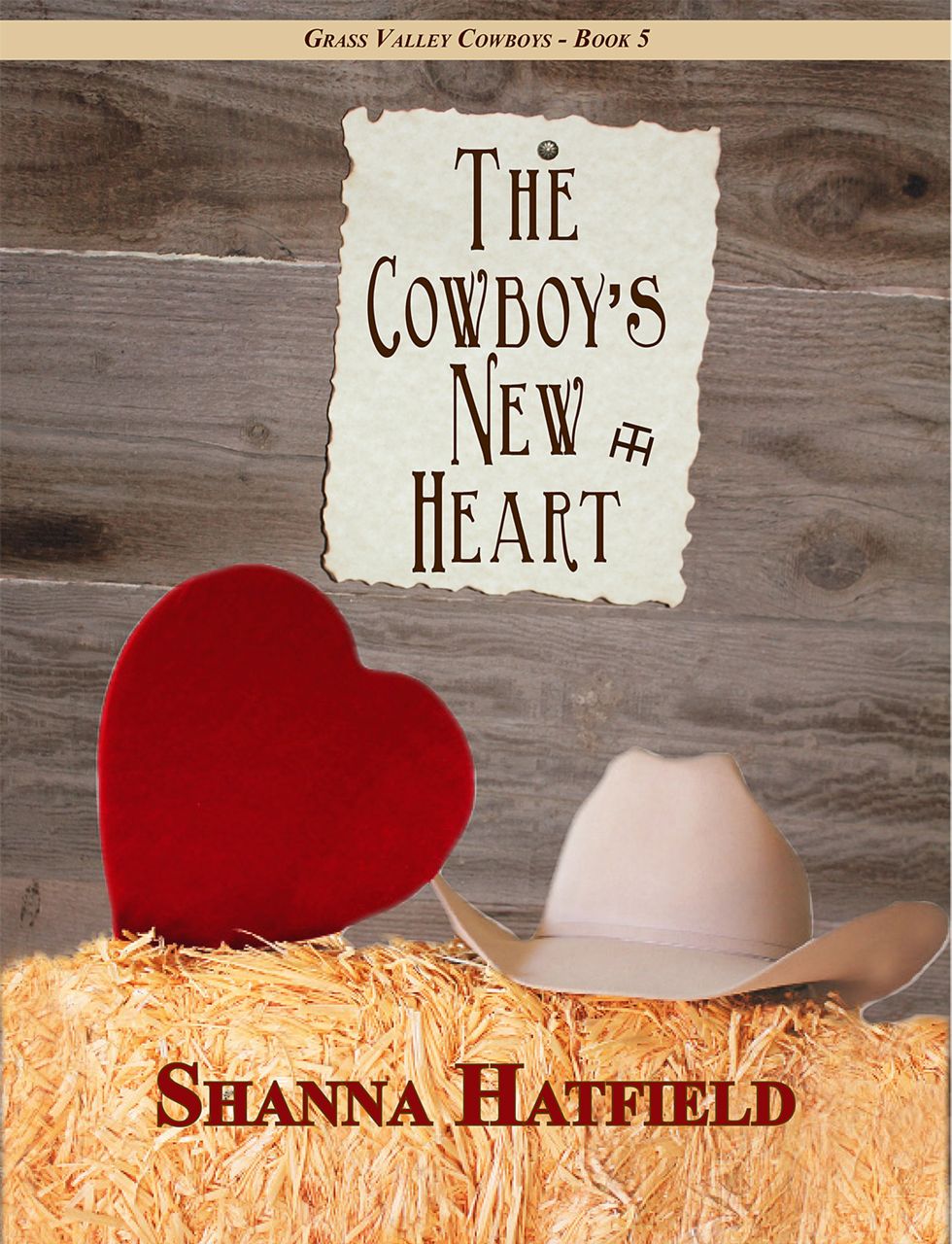 Years after her husband suddenly died, Denni Thompson can’t bear to think of giving her heart to anyone else. With three newly married sons, a grandchild on the way, and a busy life, Denni doesn’t give a thought to romance until she meets the handsome new owner of Grass Valley’s gas station. Former bull-rider Hart Hammond spent the last twenty years building up a business empire while successfully avoiding love. He buried his heart the same day he made his last bull ride, and has vowed to never make the mistake of loving a woman again. Then he meets Denni Thompson, the beautiful mother of the fun-loving Thompson tribe. Can a broken-hearted widow and a heartless cowboy find love?

The Cowboy's New Heart is available on Kindle, Nook and Smashwords. 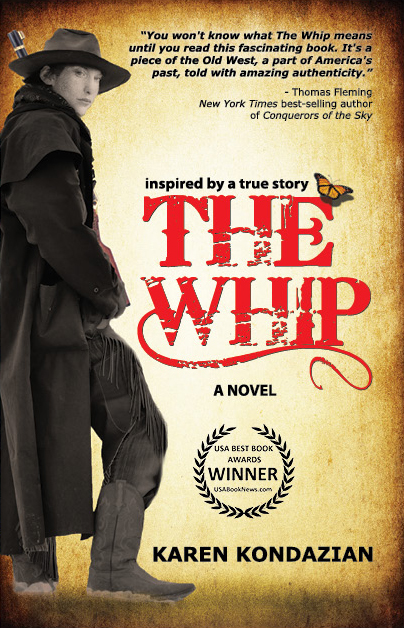 Karen Kondazian's award-winning novel, The Whip, has been voted #1 on Goodreads.com for "Books that should be turned into a movie". Kondazian says, "Every vote counts and if you have not read The Whip, please take a look at the synopsis and if you feel that the story is worthy of being turned into a film, please vote here!"

The Whip is inspired by the true story of a woman, Charlotte "Charley" Parkhurst (1812-1879) who lived most of her extraordinary life as a man in the old west. As a young woman in Rhode Island, she fell in love with a runaway slave and had his child. The destruction of her family drove her west to California, dressed as a man, to track the killer. Charley became a renowned stagecoach driver for Wells Fargo. She killed a famous outlaw, had a secret love affair, and lived with a housekeeper who, unaware of her true sex, fell in love with her. Charley was the first woman to vote in America (as a man). 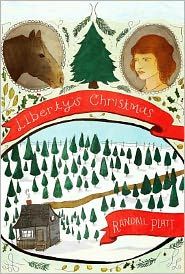 Randall Platt's young adult novel, Liberty's Christmas, is a finalist for the 2012 Reading the West Book Awards from the Mountains and Plains Independent Booksellers Association.

Can’t see the trees for the forest? Liberty Justice Jones can, but then she’s brilliant— little good it does her in a small town in the throes of Depression that leaves a fatherless family without anything, sometimes even food. Without, except for resourcefulness in the worst of times. This is a transcendent story for all the seasons of life, offering a lesson for here and now.

Platt says, "This is a great way to begin the week! I am honored to be included on this list with such great company!" 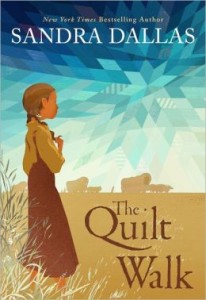 Ho for Colorado! It’s 1864, and Thomas Hatchett has just told his family they will move west. He’ll sell the farm, buy a covered wagon, and load it with construction supplies. Pa plans to build a business block in the frontier town of Golden, Colorado. There is no place in the wagon for trunks of clothes, so Ma and their daughter, Emmy Blue, must put on their dresses, one on top of the other, and wear them all the way to Golden.

But what about ten-year-old Emmy Blue? Part of the little girl wants the excitement of going to a new place where the family might become rich. After all, Golden is the Wild West. She’d be busy watching out for Indians and hunting for gold. But the other part of her wants to stay in Illinois, with her friends and grandparents. During her final good-bye, Grand Mouse gives Emmy Blue tiny fabric pieces. Concerned that Colorado is no place for a proper young lady, Grandma Mouse is determined that Emmy Blue learns to sew. Emmy Blue’s journey west becomes a quilt walk.
Posted by Susan J Tweit at 6:04 PM 5 comments: