Spirit of the West: A Festival of Everything Western!

Melanie Chrismer, Doreen Chaky and I have arrived safely home from last weekend's Spirit of the West Festival in Sioux Falls, SD. In spite of Mother Nature unleashing all kinds of rain, wind and tornado touchdowns, we all agreed that the experience harkened back to each of our newspaper reporter days.

While promoting Women Writing the West, Melanie and I were taught to quick draw, and I amazed myself with a time of one second — that is, draw, shoot and hit the target. Melanie's time was lauded at 1.3 seconds. Also learned how to load a Civil War cannon. Did you know you need to do everything from the side of the barrel? And, after the cannon is fired, it’ll jump about 8-12 feet? We were taught the tasks of how to “pick and prime” and “sponge and worm” the cannon, too.

We introduced ourselves to the Festival's Special Guest Cheryl Rogers-Barnett — you know, Roy Rogers’ and Dale Evans' daughter. What a great lady, and her husband Larry let loose some stories of their high-school-sweethearts days while he visited us at our tent. She autographed her book, "Cowboy Princess, Life with my Parents Roy Rogers and Dale Evans," for us and we piqued her interest in WWW.

There were reenactors of all sorts — soiled doves, saloon gals, cowboys, horse thieves, doctors, saddlemakers, you name it, they were there, spread out over 50 acres of a 160-acre hayfield. We befriended ‘Silverado,’ whose specialty is gun spinning, and he could also be seen cracking his whip from time to time. He explained the reason a whip cracks is that the momentum the whip carries — 600 to 900 mph — breaks the sound barrier. Neat, huh? He was a favorite with the kids.

The Hags on Nags, a small group of older women who ride their horses through the state parks in the Tri-State area (South Dakota, Iowa, Minnesota), stopped by our tent to learn about our authors. We chatted with cowgirl poets Yvonne Hollenbeck and Diane Tribitt who attended the Festival, and met author/stuntman Bob Petitt. He regaled us with his stunt history, including the times on Magnum, P.I., Lonesome Dove, and doubling for Tommy Lee Jones. He sure looks like him!

We all bought Western scarves and were shown how to tie a special knot in them. I told myself that I didn't want to spoil such a great knot so I planned to slip the tied scarf over my head. But after dinner that night, I discovered I had dripped salad dressing right on the knot! Sheesh! Now I have to go to their website and figure out how to tie my scarf again.

Melanie delighted that all of her Phoebe Clappsaddle children’s books were sold at the Mercantile, and many festival-goers who dropped by the WWW tent were disappointed they couldn't purchase our authors' books that we had displayed. They had to settle for taking home our WWW Catalog of Authors' Books and the Newsletter. Even though the weather hindered us from giving any formal presentations about writing, the three of us were constantly talking about writing and Women Writing the West to whoever came to our tent to check out who we were or to get out of the rain.

My flight changed so much we've changed the date of my signing to October 19, 11:00 to 1:00 at the Briargate Barnes and Noble in Colorado Springs. I'd love to have you join me there where I'll talk about my new book, A Clearing in the Wild and sign books you may have already purchased.

We've also had a few changes for the upcoming conference. One of our agent panelists, Don Pape, is no longer an agent with Alive Communications and we weren't able to replace him. BUT, good news, we do have an addition of an editor, Sue Lutz, President, Dialogue Publishing, a Colorado firm, is joining us. Her bio information should be up on the web shortly.

Over the weekend I taught a workshop called Landscape, Story, Spirituality and Women. I read some new authors (for me) to prepare and highly recommend Molly Wolf's White China, Finding the Divine in the Everyday. She's a Canadian who also has a blog called Sabbathblessings. Just a great book about taking time for ourselves and refueling. I'm hoping our conference will do just that.
Posted by Jane Kirkpatrick at 5:28 PM No comments:

What's new on the Women Writing the West website? Here are a few items of interest:

The 2007 Catalog of Authors' Books is available for download.

The The 2007 WILLA Literary Award Guidelines and Application are available for download.

We're testing out the software for a brand new online readers' group Check it out if you want to be a charter member. It's open to the public, and anyone interested in reading and talking about women in the west is welcome.
Posted by Donna D at 7:29 AM No comments:

Women Writing the West will be exhibiting at the M&P (Mountains & Plains Bookseller Association) show in Denver, Colorado and the Spirit of the West Festival in Sioux Falls, South Dakota, both on the weekend of Sept. 15-17, 2006.

At both events, we will be displaying members' books and providing catalogs and membership information to booksellers and authors. We always have a good time at these events, so if you'll be attending either one, make sure to stop by our booth for a chat and to take a look at our members' newest books.
Posted by Donna D at 7:13 AM No comments:

I’m off on Sept. 6 for Portland, Oregon, and the 64th WASP (Women Airforce Service Pilots) reunion. This will be my fifth WASP reunion since I began writing about them back in the 1990s. They are the subject of both of my published books and two more works-in-progress. Not only are these remarkable women – all age 80 and older now – inspiring to be around, I am fortunate enough to be one of the oral historians officially recording their stories. That is what I will be doing between Sept. 6 and 13 – capturing their voices and experiences for posterity under the auspices of the WASP Archives at Texas Woman’s University in Denton.

For those who DON’T know, 1102 women pilots flew for the U.S. Army in World War II - everything from single engine trainers to four engine bombers. In 1944, a select 134 of these women ferried (flew the plane from the factory to the docks for shipment abroad) two-thirds of the pursuit (fighter) airplanes built in the U.S. Good stuff!

A side note: I expect to join our Prez Jane Kirkpatrick and her husband, Jerry, for lunch in The Dalles next Sunday, Sept. 10. They live only 50 miles from there. I am driving to The Dalles from Portland Sunday morning — with my “boss” Dawn Letson, the head of the TWU Woman’s Collection — to conduct an interview with a WASP who lives there. Those who attended last year’s conference may remember that Dawn spoke to us about research and the collection at TWU.

If anyone living in or near Portland is interested in my books, I will be at the Marriott Portland Downtown this Wednesday late afternoon through Saturday night. Come by the WASP Hospitality Room and see me. If I’m not away doing an interview, I will be there selling my books and talking to people.

Hi to my friends in WWW. For the first time, in October, my publisher is sending me to Dearborn, MI to meet with booksellers from the Great Lakes Booksellers Association. While I'll be encouraging them to order in my spring 2007 release, A Tendering in the Storm, (second in a Change and Cherish Historical Series) I hope to have a few minutes to talk about Women Writing the West, too. If you're from that area and have a favorite independent bookseller, let me know so I can say hi to them and show them our catalog.

This is my first blog entry for WWW. I'd be remiss if I also didn't mention our conference coming up in Colorado Springs Oct 20-21 and the WILLA Literary Award Reunion October 19 f rom 4 to 7 at the Tattered Cover Bookstore in Denver. The reunion is a free event. Bring your friends. The conference has a cost but if you are interested in writing and empassioned by the west, you'll find a welcome at the Wyndham.

And one last post: I have a book signing at the Briargate Barnes and Noble in Colorado Springs, October 18, 2007 at 8:00 PM. It was scheduled earlier but the flight from Salt Lake kept getting in later so please stay up and come see me! Have a great day. Jane
Posted by Jane Kirkpatrick at 2:11 PM No comments:

I just wanted to let you know that my second book, Arctic Lace is finally coming out on October 1st. Thanks to all the WWW members and the group to a whole for helping me make it through the journey of conceptualizing, researching, and writing this book! 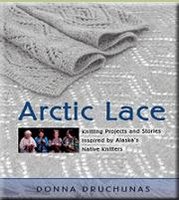 Here are a couple of places where you can see Arctic Lace and hear me talk about the process of researching, writing, and designing the knitting projects:

Sept. 10, 2006
Fort Collins, Colorado
Knit Wear
As part of ArtWear Fashion Week 2006, KnitWear will celebrate the world of knitting. We invite you to join us for this Knitting Extravaganza! Pre-publication celebration for Arctic Lace at the Lincoln Center Canyon West Room, 11:00 a.m. - 4:00 p.m

Sept. 29, 30 and Oct.1, 2006
Anchorage, Alaska
Yarn Expo III
Join me along with my publisher Deborah Robson at Yarn Expo III’s Sunday vendor market as we debut Arctic Lace. Oomingmak knitters will also be on hand to autograph the book. I will present a slide show detailing how the book was researched. Deb and I will also be teaching workshops from Arctic Lace, The Knitted Rug, and Knitting in the Old Way.

My full schedule is on my website.
Posted by Donna D at 5:22 AM 3 comments:

Join author Jo-Brew as she explores life through triumphs, tragedies, and plain old existence as it affects the woman of today. Her novels, columns, essays and short stories shed light on the paths of our own lives and of those around us.

Check out her website at http://www.Jo-Brew.com/ to learn more about her books.
Posted by Jo-Brew at 10:16 PM 1 comment:

Hi Everyone, this is our brand-new Women Writing the West blog. Here you will find post from many of our members announcing new books, providing information about their book signings, readings, and other events. This is the place to look for news about members of Women Writing the West.
Posted by Donna D at 8:16 AM No comments: