I finally have a blog in no small part because of the support of Women Writing the West. Why is it that new things tend to increase our anxiety -- or at least they do mine. I'm always wondering how women used to do it, take on new tasks without ever having the certainty of the outcome. Well, the reality is, we're all living in a wilderness at times looking for new information and trying very hard to discover how to take the next steps. In the writing life, blogging is "a step" I've taken and I'm grateful to the women and men who stepped before me who made it possible. Now we'll see what it does for reader connection. That's my hope for this blog, at least, to stay connected to readers as well as to other writers. Come visit my blog http://janekirkpatrick.blogspot.com It's called Harvests of Starvation Lane and my writing life has surely been a harvest for me. Jane Kirkpatrick, www.jkbooks.com
Posted by Jane at 5:44 PM No comments:

Clarice opened the brief memo folded into the get-well card and read it again, her anger causing her hands to tremble.
Claire,
All of us hope your recovery is going better. It is difficult to explain your long absence to impatient clients. We will have to discuss making permanent changes if you aren't back soon. There may be other options so let us know when we can expect you.
Liz
No word at all from her mother for the last three months, and now this. She crumpled the memo and started to toss it in the wastebasket but changed her mind and stuck it in the pocket of her shorts. Still fuming, she forced herself to continue with her interrupted schedule. She opened the front door to step onto the little porch.
Whistles and cat calls from a crew of roofers working on the house across the street caused her to hesitate, but not for long. She turned and picked up the cane before beginning limping steps toward the street and bike path.
She started the three mile walk slowly but pushed herself to pick up the pace, passing in front of her father's house half a block past her own apartment. She was so frustrated she hoped he wasn't home from work yet, or wouldn't notice her going by. He'd want to talk if he saw her starting her third walk and whe didn't feel like chatting after the note. He could read her like a book. He'd know she was upset.
She heard her father's screen door slam. Dammit. Then she heard the thud of his footsteps as he came after her, nearly at a run. She didn't slow.
"Clarice, wait up. Why so fast?"
"I have to get in my three miles," she called back but still didn't slow.
"Knock this off, Clarice. I need to talk to you."
Hearing the anger in his voice, she slowed. This wasn't his fault. He was only trying to help.
"I'm sorry, Dad. I want to get this done. I need to get back to my own life."
www.Jo-Brew.com
Posted by Jo-Brew at 4:17 PM No comments:

Western Women draw half the Town

WWW members Jane Kirkpatrick (I'm in the green) and Molly Gloss (tall and in the brown) were two of four Western Heritage presenters in little Moro, Oregon (pop 300) that attracted 123 people from around the region to celebrate Women in History month and the heritage of the west. The event was held in the 120 year old Presbyterian Church, the only church in the community and was funded in part from a grant given by the Oregon Historical Trust. 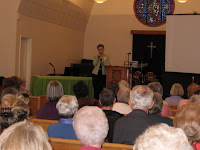 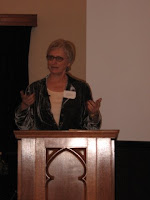 Jeanne Carver (in the leather skirt), co-owner of the Imperial Stock Ranch one of the oldest ranches in the country still in operation and Sherry Kaseberg, a Sherman county Commissioner, rounded out the event that included stories of women homesteaders, how women were portrayed in early western literature, the impact of place and art on stories of pioneers, women of color and the relationships of work and spirituality and landscape on women's stories. Even the chuckwagon lunch included an original 1880s chuckwagon and a story about the role of chuckwagons in settling the American west. 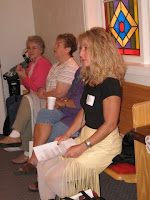 As they say in old Grange secretarial reports "A good time was had by all."

Jane Kirkpatrick, www.jkbooks.com, Award-winning author of 13 novels and two non-fiction books. Look for A Tendering in the Storm, April 17, Book Two in the Change and Cherish Series (WaterBrook Press/Random House).
Posted by Donna D at 5:03 PM No comments:

Join me at a Denver garden book event! 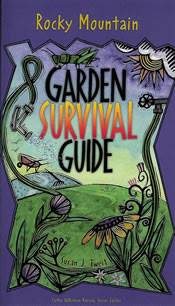 If any of you Denver-area writers are in a gardening mood this Saturday (April 7th), come by Tattered Cover Bookstore in Highlands Ranch (9315 Dorchester Street, between Lucent Drive and Broadway in the Highlands Ranch Town Center) from 1:30 - 3:00 p.m. I'm part of an "expert panel" of garden book writers including Angela Overy (Sex in the Garden) and Dave Wann (The Zen of Gardening in the High and Arid West) there to answer your questions about playing with plants in our challenging environment. The point is to sell books, of course, but I'd be happy to see any and all of you whether you buy books or not.

Speaking of gardening, the spinach and Mesclun lettuce mix I planted in my kitchen garden last fall survived the winter (under row covers and some serious snow) and are now happily producing early greens. And the tomatoes and basil I seeds I started inside three weeks ago are growing apace; they're nearly ready to transplant to larger pots. The daffodils are blooming and we saw the first mountain bluebird today, blue as a chip of sky fallen to earth. Spring is here!

Susan J. Tweit -- check out my blog at http://communityoftheland.blogspot.com/
Posted by Susan J Tweit at 7:18 PM No comments: